Time and attendance: do managers dream of electric sheep?

Picture it: a quiet valley.

Moss-fringed granite boulders pepper the soft lush carpet of fresh grass as shaggy sheep track the hillsides, grinding and gurning as they go. Their thick, dense fleeces at once reflect the fine morning mist and protect their wearers from it.

The shepherd’s leathery crow’s feet hug icy keen eyes that scan the contours of the landscape, watching the scattered flock. Checking, counting, plotting positions and reading the situation as a chess master hovers with aerial strategy the myriad routes of attack and defence.

The shepherd’s slender hound Bess is poised, her friesian coat rapping matted fingers in an impatient wind. She surveys the crags and corners of this idyll for ripples in the peace. Her ears spike and coax the faintest of murmurs, one ear diligently saved for the next coded signal from her companion.

The cloud-borne flock are undisturbed.

It probably still exists somewhere. But like all walks of life, the landscape and how we operate best in it is changing. Once upon a time, one shepherd and his trusty dog might have tended to a flock of a couple of dozen sheep. They’ll have watched over them and found them as they strayed. Protected them from threats. But even the most experienced shepherd will have lost track of them and would have tried to keep them rounded up as much as possible. Keep count. Keep them in view. And when a wolf did come, focus would have been lost and the recovery would have been fraught with difficulty.

So as farming moves inexorably towards greater scale, efficiency and profit, do they employ more shepherds? More dogs?

No. As everywhere else in life and business, technological ingenuity is playing its part. Sheep can now be tracked by GPS. The shepherd no longer has to have line of sight to know where stray sheep may be. They can use an app on their mobile phone, and see the positions of all their sheep on a map and in relation to themselves. Androids seeing electric sheep? Get Harrison Ford on the phone.

So what am I on about now?

Are we trying to persuade you into a life of simple rural bliss? Sounds tempting, eh? But no; I’ve been deploying the old allegory again. Leading you down the garden path. Or in this case, over a hill in mid-Wales.

You see, keeping an eye on individuals and their movements, especially in a large organisation or over a wide area, can be a difficult task. If you have dozens of colleagues coming and going, perhaps spread over multiple locations, or maybe even working at a remote location, how do you keep track of who’s where? What about contractors or temporary staff? Employees paid by the hour?

Technology has provided answers to these problems before, of course. Machines that punched a card to clock in and again to clock out have been in use in factories and offices for over a century – and the terms clocking on and clocking off are in common parlance now even when they aren’t related to the machines.

The technology of yesteryear had a serious flaw, though: your card might have been punched, but it didn’t mean you were the one punching it. Cards could be passed around and late individuals could persuade colleagues to punch in for them to avoid losing pay or getting into trouble. Understandable, if unethical, but it presented major problems when an employer needed to know who was in a building in an emergency. When the metaphorical wolf arrived.

The humble clocking in machine has reached the 21st Century, and they’ve evolved into highly-advanced biometric time and attendance devices. Gone are the cards to punch for mates running late. With these smart new boxes, your fingerprint, eye or face is your card. You can quickly register new staff, contractors and temporary workers by ‘introducing’ them to the machine – they will take random measurements from the face, hand or digit they’re shown and then turn those measurements into an algorithm. They don’t store the images or fingerprints – just a set of numbers – so everyone’s privacy and identity is safe. They can recognise that you are you, but they can’t reproduce your face or fingerprint.

These brilliant new-fangled time and attendance devices can be placed in all sorts of situations, too. If you have more than one location, you can install devices in each and your staff can sign in to their place of work. There are even rugged, portable versions that can be placed in outdoor locations like building sites or sports facilities. Outdoor sites and the, shall we say, less clean locations are also served well by machines that read the more rugged hands or use facial recognition so the device doesn’t need to be touched. 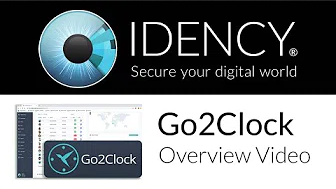 Watch Idency’s Go2Clock overview video to find out how this cloud based time & attendance software can bring all of your clocking data into one place… accessible on any device.

Oh, and they simplify your admin. The time and attendance data can be reported on and exported for payroll to help you or your HR department sync with their staff and wage records. For monitoring your staff realtime there are cloud based options that allow viewing clock records via any browser, including your mobile.

So, like the shepherds with their digitally-monitored flocks, you can keep track of who’s where and when they are there without being omnipresent or relying on the memories of colleagues. With outdoor devices, the shepherd could even keep track of their own time and attendance on the hillside.

Ah, but sorry Bess. Not sure your paws are going to work.

Find out more about our Time and Attendance solutions or get in touch.